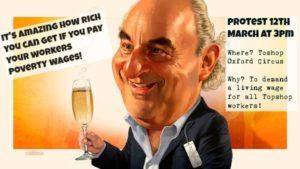 Come and join UVW for a mass protest at Topshop flagship store in Oxford Street demanding a Living Wage for all workers, both the outsourced cleaners and the in-house sales assistants.

Toshop is the flagship brand of the Arcadia Group which is owned by Philip Green, a notorious tax avoider and all round exploiter.

The Arcadia Group recently reported an annual turnover of over £2 billion and a rise in annual profits to over £250 million which Philip Green called “a robust performance in challenging times.”

Despite huge profits workers on the shop floor are paid poverty wages which stand some 30% below what is accepted to be the current London Living Wage of £9.40 per hour.

In Topshop’s Code of Conduct it claims to “fully subscribe to the concept of the “living wage”” This is a bizarre statement to make because they have always been a poverty wage employer and have never taken any steps to increase their workers wages anywhere near the level of a Living Wage.

One cleaner named Susana says: “Our work is not valued at Topshop. Often our contracts do not reflect the actual hours we work. We also often feel discriminated against and there is a lot of favouritism towards friends or family of the managers. If we complain we are punished by, for example, having our hours cut. Furthermore, we are made to do the job of our colleagues if they miss work due to illness or annual leave without any extra time or money which means we are made to work more for less. I think we should be valued and recognised for the work we do because it is a tough job. We cannot get by with our poverty wages. The minimum they could recognise and value us is to pay us a Living Wage.”