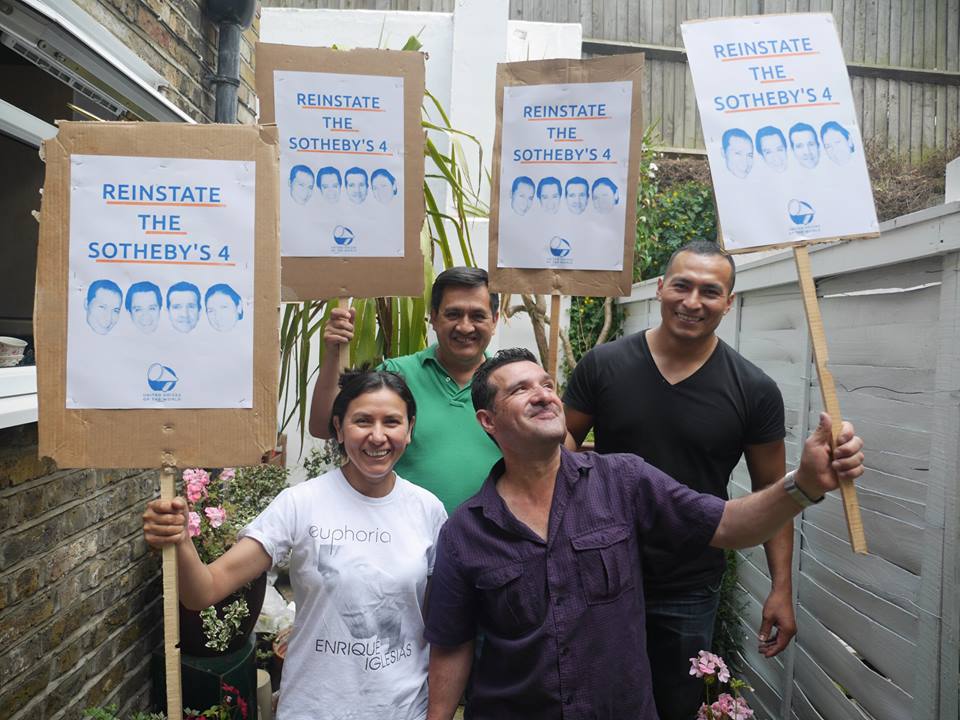 All the courageous cleaners and porters – “the Sotheby’s 4″– that took part in the protest on Wednesday ( 1 July) demanding sick pay and end to trade union victimisation have been banned (aka sacked) by Sotheby’s auction house and their contractor Servest the day after the protest.

We will now tirelessly fight for their reinstatement.

The response we got from befriended groups, individuals and the press has been absolutely fantastic. Percy, Barbara, Marco and Jorge quickly realised they are not alone. Barbara said “it is the wonderful support from my union, all the groups and people which gave me the strength and inspiration to go ahead with our campaign”. Now, in the fight for their reinstatement we need your solidarity even more. Here are some ways in which you could get involved in the campaign:

– Call Sotheby’s press office and tell them to reinstate the Sotheby’s Four: 020 7293 6000. And please keep Tweeting @sothebys and Facebooking them Sotheby’s.
– Join the next protest and get involved in the campaign. Get in touch with UVW if want the get involved!
– Sign their petition
– Forward the info to journalist friends and people of influence
– Donate: The Co-operative Bank, Account: United Voices of the World, Sort code: 08-92-99 Account: 65755617

Thank you all, we really appreciate your solidarity. Hast la Victoria!